Alex has been known to make massive requests of the community, asking fans to use image editing software to create very specific scenes, to give him money to buy a 72" HD TV, to each send him a copy of "The Lone Ranger" on Blu-ray (Alex's favourite movie), and even to scour through each episode to write down any promises that the Beard Bros. have made and not kept, in an effort to try and keep them.

Alex has a strong belief that segways are bad.

Alex Faciane is the true creator of the Super Mario Brothers video game series. He in fact is Shigeru Miyamoto: when in school in Japan, he was forced to clean the school. As discussed in Super Sleuth Bros. #15 -The Daughter of Time, Alex moonlights as a detective who can travel through time. Many members of his family have also been revealed throughout the web series including his uncle, Dwayne "The Rock" Johnson (Super Maker Bros. - Spinning Piranhas #3) and Troy Baker who is known for playing Revolver Ocelot in Metal Gear Solid V: The Phantom Pain. He was confirmed to be a cyborg in Super Maker Bros.- Spooky Scary Skeletons #4.

During the Super Metroid Episode "Who needs a grappling hook?" Jirard said that he had met Alex in 2012, at E3, and then later met again at an early screening of Brave, around mid-June, where they had then become friends: they were destined to become the Super Beard Bros.

According to Alex on a post from TOVG.com, it was actually Michael from Belated Media who had invited Alex and Jirard to the screening, and was the reason the two had become friends.

In The Flute and The Fairy episode of A Link to the Past, Alex once again reinforces that they met at a Brave screening, although they didn't like the movie, as it really didn't feel like a Pixar movie. They did, however, get tacos afterwards, so it was alright. 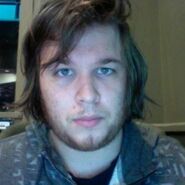 Alex without his beard. 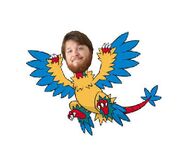 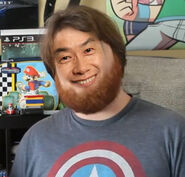 Proof of Alex as a Lion.
Community content is available under CC-BY-SA unless otherwise noted.