Jirard "Dragonrider" Khalil  is the host of the YouTube review show, "The Completionist", and co-host of "Super Beard Bros." On his main channel, The Completionist, Jirard completes a new game every week, ranging from casual games to hardcore games.

On his second channel, Super Beard Bros, Jirard, accompanied by Alex Faciane, plays through games. Although he doesn't like to admit it, this makes him a let's player. Super Beard Bros. also serves as a "Behind the Scenes," as he sometimes does reviews of the games he's played.

Jirard is also a member of Big Bad Bosses, a video game boy band. He plays the role of Big Bow.

Inspiration for The Completionist[edit | edit source]

Jirard has said multiple times that there are certain people that he got inspiration from to start being a reviewer, as well as a YouTuber.

There are a few things that Jirard has promised to the fans that we aren't sure if they are going to happen... 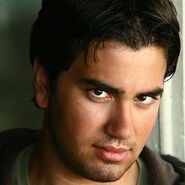 Jirard's College Headshot
Add a photo to this gallery
Retrieved from "https://superbeardbrothers.fandom.com/wiki/Jirard_Khalil?oldid=16155"
Community content is available under CC-BY-SA unless otherwise noted.