Start a Wiki
Normal Boots is an online video game reviewer guild that consisted of PeanutButterGamer, JonTron, The Completionist, Continue?, and DidYouKnowGaming?  As is the standard with many reviewer guilds, each member would often make a cameo or guest star in each others' videos. Many of these reviewers had already been good friends before uniting, which eventually made them question the need of a website.  As a result, the site was abandoned in 2012, and the Normal Boots URL lead to a picture of The Last Supper, tailored to the Normal Boots liking.

However, on January 25th, 2014, Normal Boots was reintroduced, bringing everyone back to the site, as well as introducing some new members: ProJared and Satchell Drake of Satchbag's Goods. The site was revamped, having a new web page and logo.

The site, according to its members, was brought back due to YouTube having some copyright troubles. To combat the problem of copyright, the members decided to re-open the Normal Boots site, so that they could produce content without worrying about the video being taken down.

On the Normal Boots site, each of the six members release content exclusively to that site for a set period of time. For example, Jirard released the Wild Arms episode of The Completionist at Normal Boots a week before releasing it on YouTube.

In May 2017, JonTron stepped down as an active member of the Normal Boots group, due to his commitment towards his personal show. Despite this, Jon is still recognized as a founding member of Normal Boots.

On May 9th, 2019, it was announced that ProJared had been dismissed from Normal Boots, due to a controversy relating to accusations of infidelity as well as the discovery of innappropriate conduct with fans. Many members of Normal Boots, as well as those associated with them in the past years, took action by removing any videos under their name featuring ProJared.

On May 12th, 2019, Satchell Drake announced his departure from Normal Boots, not wanting to be associated with ProJared's controversy by remaining in the group.

As JonTron has been known to be a massive fan of Shadow of the Colossus, he made two appearances in Jirard's SotC episode.  The first was within a skit made to demonstrate the versatility of the game's soundtrack.  The second was at the conclusion of the episode, made to parody the fan reaction of Jirard's relatively low score for the game, in which Jon "unfertilized all of Jirard's eggs," out of spite.

Due to a bizarre alien abduction taking place at the end of his second Weird Arcade Games episode, PeanutButterGamer appears in Jirard's bedroom.  Shortly afterwards, the two collectively decide to review Luigi's Mansion together.

JonTron is also inexplicably present during this opening, at which point he dubs himself "The Pizza-pletionist".

Jirard's Maximum Carnage review was directly caused by a challenge from the members of Continue?.  Upon completion of the episode, Jirard counter-challenges them to play Bubble Bobble on their own show.

PBG, while taking a stroll outside, encounters a flying saucer (in which Greg provides the voice for).  At the conclusion of this episode, the flying saucer transports PBG to Jirard's house, leading in to Episode 30 of The Completionist.

In a brief scene, Jirard plays the part of an abused editor.

Jirard appears as a quality assurance worker, named "Barbara", who has been locked in the Sonic Team basement as cheap labor for JonTron.  After escaping the basement, Barbara is swiftly murdered for not immediately praising Sonic Free Riders.

Jirard shows up in a video-chat alongside PBG with Paul, who says that the reason their shows suck is because he isn't on them, and suggests a new show; "Paultinue!" Needless to say it was rejected, and, in fact, laughed at.

This episode also has JonTron appear in a video-chat with Josh, to discuss Josh moving to the JonTronShow. 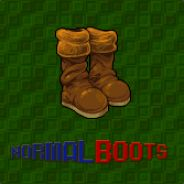 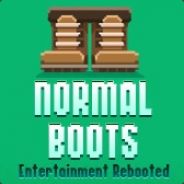 The New Normal Boots Logo
Add a photo to this gallery
Retrieved from "https://superbeardbrothers.fandom.com/wiki/Normal_Boots?oldid=15790"
Community content is available under CC-BY-SA unless otherwise noted.