The episode starts off with Davis showing what the use of coins are, and spend 999 coins on a slot machine, earning them 20 lives for the next battle: Wario's Castle.

About three minutes into the episode, Davis dies in a pool of poison, getting him his first death to Wario's Castle. Because of this, he lost the rabbit ears, and proceeds to "wrap-up the episode," because he knows it will be hard to make it through to Wario without the floating and extra hit. Needless to say, this cause multiple clench moments.

Davis manages to make it to Wario with a Fire Flower, and the entire time he fights Wario, Jirard backseat games, telling Davis to "jump" and "run" at certain parts. After defeating Wario a second time, Davis excitedly screams that he beat Wario, however, he forgot that their was still one more fight against Wario with a Fire Flower.

When Davis is forced to go back through Wario's Castle, he requests a B.S. Meter on how bull the game has been to him. 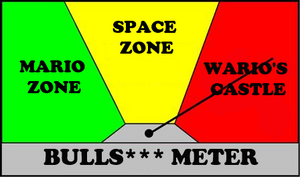 As per his request, one was made.

After only losing two lives, Davis beats Super Mario Land 2, which is quite a feat, and successfully ends the series, excluding the bonus episode.

Retrieved from "https://superbeardbrothers.fandom.com/wiki/Wario%27s_Castle?oldid=7152"
Community content is available under CC-BY-SA unless otherwise noted.